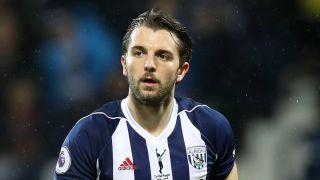 The Football Association (FA) has announced it has charged Jay Rodriguez following an incident in a Premier League game between West Brom and Brighton and Hove Albion.

Rodriguez was involved in an altercation with Brighton defender Gaetan Bong in the second half of West Brom's 2-0 victory on January 13.

Bong made a complaint against Rodriguez after the forward appeared to squeeze his nose and waft a hand at the Cameroon international.

And the FA has now confirmed Rodriguez has been charged following an assessment of the incident.

"It is alleged he used abusive and/or insulting words which included a reference to ethnic origin and/or colour and/or race," said the FA statement.

"Rodriguez has until 16 February 2018 to respond to the charge."

Referring to Rodriguez's gesture, Bong told SFR Sport: "He did that because of the colour of my skin. Everybody can see this gesture. And I asked him to repeat what he said.

"At this moment, I think he realised what he said. And he tried to limit the damage."

"As a club we remain fully supportive and committed to backing Jay throughout this process," Garlick said.