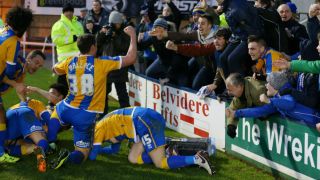 Jack Grimmer netted a 97th-minute winner as Shrewsbury Town staged a stunning comeback to triumph 3-2 and knock Championship promotion hopefuls Sheffield Wednesday out of the FA Cup fourth round.

League One strugglers Shrewsbury twice trailed to goals from Lewis McGugan either side of Jean-Louis Akpa-Akpro's equaliser and were still behind with three minutes to go.

Shaun Whalley levelled by converting the rebound after Akpa-Akpro's penalty was saved and deep into stoppage time, Grimmer headed home to spark jubilant scenes and send the Shrews into the fifth round for the first time since 1991.

"People are asking for attacking football. I cannot do any more than my right-back getting on the end of a cross in the 97th minute!" said Shrewsbury boss Micky Mellon.

There was a similarly dramatic finish at The Hawthorns as League One Peterborough United rescued a 2-2 draw with West Brom.

Saido Berahino had twice given the home side the lead, his second coming in the 84th minute, but Jon Taylor equalised to earn the Posh a replay.

Arsenal, winners in each of the past two seasons, recorded their 14th consecutive FA Cup victory as Alexis Sanchez inspired Arsene Wenger's men to a 2-1 home win over Burnley.

Sanchez, who had not started for two months, set up the first for Calum Chambers and then netted the winner after Sam Vokes had levelled for the visitors.

There were convincing wins on the road for Premier League high-flyers Tottenham and Manchester City, who each netted four times.

Watford, Crystal Palace and AFC Bournemouth are also into the fifth round after a trio of narrow victories, while Liverpool and West Ham played out a 0-0 draw that lacked any of the drama from their 2006 final classic.

Oxford United were unable to recreate their heroics against Swansea City in the previous round as they crashed out 3-0 at home to Blackburn Rovers.