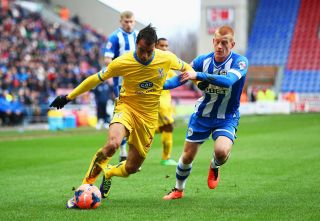 Aaron Wilbraham's second goal for Palace just a few minutes after he came on looked to have earned a replay after Ben Watson had opened the scoring against his former club.

Winger McClean had the final say though, as he struck 12 minutes from time in the fourth round clash at the DW Stadium to dump out Premier League outfit Palace.

Tony Pulis' men must now turn their attention back to staying in the top flight, while Wigan can dream of another trip to Wembley as well as mounting a promotion push.

Defender Paddy McCarthy returned to the Palace line-up as captain, having not featured since April 2012, as Pulis made four changes to the side that beat Stoke City last weekend.

On-loan striker Nicky Maynard made his home debut for Wigan and Uwe Rosler also made four alterations to the side beaten at Doncaster Rovers.

Wigan attempted to stamp their authority on the game in the opening exchanges, but Palace came close to an opening goal seven minutes in when Cameron Jerome's strike produced a fine save from Ali Al-Habsi.

Stuart O'Keefe fired straight at Al-Habsi after Marouane Chamakh had cut the ball back as the visitors took the upper hand.

Palace were almost caught out from a short corner after 19 minutes, but Callum McManaman fired wide of the far post.

And the home side were in front nine minutes before half-time, when McClean broke down left and his cross was swept home by the on-rushing Watson with his right foot.

There was another blow for Palace when Jonathan Parr, who recently returned from five months on the sidelines with a ligament injury, was carried off after a lengthy stoppage late in the first half.

McManaman spurned a chance to double Wigan's lead seven minutes into the second half when he flashed a left-foot shot wide after Palace failed to clear.

But Palace got into their stride and Al-Habsi thwarted them once again when he kept out Jason Puncheon's strike with a fine reflex save.

There was more frustration for winger McManaman when his shot deflected wide after he opted to take an extra touch.

And he was made to pay when Wigan failed to clear Barry Bannan's corner and substitute Wilbraham made an instant impact as he struck from close range after 69 minutes.

Fellow substitute Dwight Gayle could have put Palace in front, but Al-Habsi made a fine save down to his left after a swift break.

But it was Wigan who snatched a winner 12 minutes from time when Roger Espinoza set up McClean and he found the back of the net with a left-footed strike from outside the area.

McCarthy missed a free header that would have forced a replay late on, before Gayle had penalty appeals turned down after having his shirt pulled in the area.