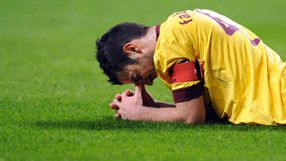 But the biggest blow for Arsene Wenger's side could be a new injury blow to captain Cesc Fabregas, who limped off clutching his hamstring in the second half after stretching to control a ball into the Braga penalty area.

Substitute Elton created Braga's first goal moments after coming on by supplying a delightful pass from his own half. Matheus ran into the box and put the ball over Arsenal keeper Lukasz Fabianski on 83 minutes.

GEAR:10% off Arsenal home, away and retro kits, courtesy of online retailer Kitbag

Matheus' second came deep into injury time, also from a counter-attack, with the forward surrounded by three Arsenal defenders but still managing to fire in a shot that went in after hitting the bar.

Braga had conceded six goals in their group-stage debut at Arsenal in September but were much improved at home, giving the English side little room to deploy their smooth passing game.

In a largely uneventful and low-tempo first half, clear chances were rare for either side.

The Gunners' best opportunity came when Cesc Fabregas led a counter-attack and sent Theo Walcott racing through into the box on 35 minutes, but keeper Filipe rushed out to block the forward's shot.

Walcott posed a danger again five minutes after halftime with a free kick that went just over the Portuguese bar.

Arsenal coach Arsene Wenger then substituted his forwards and Carlos Vela was unlucky not to have earned a penalty when he was fouled by Alberto Rodriguez in the 78th minute.