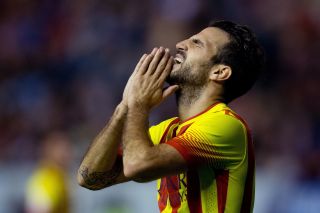 The Spanish star joined Arsenal from Barcelona's youth system as a 16-year-old in 2003 and went on to become club captain.

Fabregas returned to Barcelona in 2011 but believes he will always be welcome back in London, whether that is in a playing or coaching capacity.

"(Arsenal's) a club that is always going to be there and will always open its doors to me," Fabregas told The Guardian.

"The club's like a family so even if it wasn't as a coach, I'm sure they'd give me the chance to play a role.

"Arsenal is in my heart and always will be.

"I don't know if I'll have the opportunity to go back and play there one day, or maybe after football."

The 26-year-old creative playmaker has won the La Liga, Copa del Rey and UEFA Super Cup since moving back to Camp Nou but a lack of success in England still holds regrets.

"I wish I'd gone (from Arsenal) with a title," Fabregas said.

"I'll always have that thorn in my side, though, that sadness."

When asked why Arsenal failed to win the English Premier League in his time at the club, Fabregas replied:  "I don't know, there are lots of things; there was always something.

"I remember, for example, the season Eduardo had that terrible injury and that impacted upon everyone and from there we started to drop.

"We were competing with Manchester United right until the end but we couldn't hang on.

"We've always been there or thereabouts but we've always had dips and you're up there fighting, someone gets injured, or this happens or that, or you hear that someone wants to leave."

With Arsenal currently two points clear on top of the Premier League, Fabregas believes this season is a great opportunity for Arsene Wenger's side to break their eight-year trophy drought.

"They've started very well and they look very strong; let's see how they last," he said.

"A lot gets decided over Christmas: the team that hangs in there best, that can resist the best, will take the title."