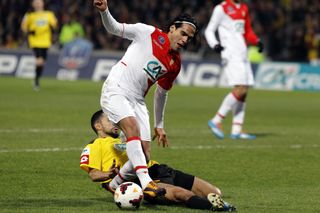 The Colombia international sustained the injury during Monaco's Coupe de France victory over fourth-tier side Monts Or Azergues on Wednesday.

Initial reports had suggested the 27-year-old would definitely miss the World Cup, but Dr Jose Carlos Noronha has suggested he could still have a chance of playing in Brazil later this year.

Falcao underwent surgery on Saturday morning in Oporto, with Noronha confirming the procedure had gone well.

"It is not impossible to dispute Falcao at Brazil World Cup 2014," the doctor told Monaco's official website.

"It depends on several factors - surgery, physiotherapy and Falcao."

Falcao has scored nine goals in 17 Ligue 1 appearances for Monaco this season after arriving from Atletico Madrid in the close-season.