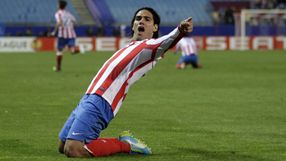 The pacy Colombia striker known as 'The Tiger' nodded Atletico ahead in the 18th minute at a festive Calderon before Jonas levelled for the visitors moments before half-time.

Goals from defender Miranda, forward Adrian and a second from Falcao made it 4-1 before Ricardo Costa netted in the fourth minute of added time to keep Valencia's hopes alive for the return at the Mestalla in a week's time.

"The important thing is that we won convincingly," Falcao said in an interview with Spanish television.

"The victory is ours as well as the advantage in the tie so we have done a very good job."

If Uruguayan Diego Forlan was the driving force behind Atletico's 2010 Europa League triumph, the mantle has now passed to Falcao, who scored in both legs of the quarter-final victory over Hannover 96 and has netted 22 of Atletico's 44 goals in La Liga this season.

He has 10 in the latest edition of Europe's second-tier club competition, level at the top of the scoring chart with Schalke 04 striker Klaas-Jan Huntelaar, although he is still some way short of the record of 17 he set last season during Porto's triumphant campaign.

Valencia were looking to avenge their controversial elimination at the hands of Atletico at the quarter-final stage two years ago, when they had a clear penalty claim turned down and went out on away goals.

They struggled to contain a fired-up home side in the early stages before midfielder Arda Turan created the opening goal when he got the better of Adil Rami on the byline and his cross was deflected to Falcao who nodded past Diego Alves.

Rami made amends for his error in first-half added time when he leaped above the Atletico defence at a corner and nodded the ball on for Jonas to prod home at the far post.

Miranda stole in behind the Valencia defence to head in Diego's free-kick four minutes after the break and Adrian sped past his marker and shot back across Alves into the corner for Atletico's third five minutes later.

Falcao then struck the goal of the night 12 minutes from time when he cut in from the right past two defenders and lashed the ball high into the net off the underside of the bar, prompting wild celebrations from coach Diego Simeone.

But in almost the last action of the match, Costa sent a powerful header past Atletico goalkeeper Thibaut Courtois from Tino Costa's outswinging corner to give Valencia hope of turning the tie around.

"We weren't very good in attack or defence tonight," he added. "For a Europa League semi-final you have to be at 100 percent and we did not manage it."

The winners of the tie will play La Liga rivals Athletic Bilbao or Portuguese side Sporting in next month's final in Bucharest. Sporting beat Bilbao 2-1 in Lisbon on Thursday.