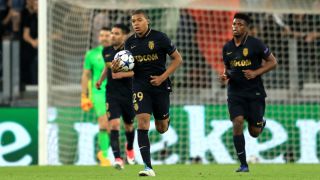 Radamel Falcao wants Monaco to improve on this season's run to the Champions League semi-finals after the Ligue 1 champions-elect were outclassed by Juventus.

Dani Alves set up Gonzalo Higuain's first-leg double before doing likewise for Mario Mandzukic at Juventus Stadium on Tuesday and blasting in to put the Italian champions four goals to the good by half-time in the return fixture.

Kylian Mbappe became the youngest scorer in Champions League semi-final history with a strike after the break in Turin, but it was too little too late.

Mbappe is just one of several young stars turning heads for Monaco this season, along with the likes of Bernardo Silva, Thomas Lemar and Tiemoue Bakayoko, as the principality club close on the league title.

Though next season's Monaco could have a significantly different makeup to the current crop, Falcao believes progress can be made and highlighted the Italians' clinical edge as the difference in the semi-final tie.

"We weren't clinical enough when we had opportunities. We fought hard all season for Monaco and for French football and we hope we'll be better next season."