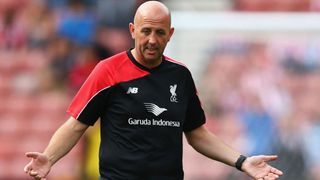 Liverpool first-team coach Gary McAllister feels the growing discontent from the club's supporters should be used to drive the club towards better results.

Brendan Rodgers' men have had a difficult start to their 2015-16 campaign, winning just two of their opening six Premier League games and scoring a paltry four goals in the process.

But McAllister believes the grumblings from the fans is a positive thing and means the club cannot settle for anything less than constantly winning games.

"That’s the thing that still impresses me here — that there are still those grumblings from the fans," he said.

"If you lose that and it does become accepted it's not going to be right. And that won’t happen here.

"It will be driven through by the frustration of the fans. We’ve got to be competing right at the highest level. It’s how I see Liverpool — I just associate it with winning things.

Boos rang out around Anfield following the club's 1-1 draw with Norwich, but McAllister says the players have to use that to their advantage.

"I have played in front of frustrated crowds when things aren’t going well and that’s when you push your shoulders back and show that bravery," he said.

"And bravery is not whacking into people and elbowing people. It’s getting on the ball in tight areas and taking responsibility. We have no fear in doing that and I don’t have any fears about us putting that right.”

Liverpool face Carlisle United in the League Cup on Wednesday before hosting Aston Villa in the Premier League on Saturday.