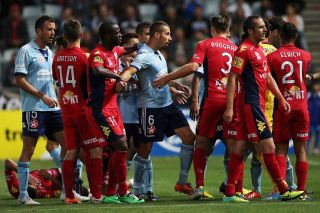 Down a goal early and thoroughly outplayed all over the pitch, the Sky Blues appeared frustrated as tensions boiled over when young striker Alec Urosevski was booked for a poor challenge on Marcelo Carrusca.

Richard Garcia played angrily all evening and copped a card later; the Blues handed five yellows in all to Adelaide's one as they committed 19 fouls, including 13 in the first half, to 12.

Farina believed both camps could have handled the situation more appropriately instead of behaving like 'pork chops'.

"The yellow cards came from the melee," he said.

"I was disappointed with both teams – our team and Adelaide for that reaction to that incident.

"I thought the referee was handling it alright, then a lot of the pork chops got involved.

"From one thing went to another and that put a bit of a dampener on the first half."

While the fracas was regrettable, it had no bearing on the result, which saw the Reds leapfrog Sydney and the Central Coast Mariners into fourth position on the A-League ladder.

United genuinely played the better football, but were helped along the way by some turnovers from the visitors.

Farina was disappointed that 'stupid mistakes' resulted in conceding a deficit that was too great to climb out of.

"We were on the attack, in their half and just again poor turnovers by either bad control of the ball or a bad pass.

"We spoke about their (Adelaide's) transitional attack but it's disappointing to concede two goals from our own attacks through basic fundamentals of football – controlling the football and passing the football.

"That's the story for me - it wasn't like we were torn apart for the goals.

"We made stupid mistakes and got punished for them."

One bright spot for Sydney was the form of young midfielder Terry Antonis, who is on the comeback trial after his extended stay on the sidelines following a horror thigh injury.

Antonis, sometimes touted as the next Tim Cahill or Harry Kewell, gave the Reds' defence headaches in the second half and came perilously close to conjuring an equaliser late in the piece.

"It was unfortunate he missed two-thirds of the season but we had to get it right with him because he had a very, very nasty injury."

As for the prospect of a call-up to the Australian squad for the World Cup in Brazil starting in June, Farina held his cards close to his chest.

"You'll have to ask (national coach) Ange (Postecoglou) that," said Farina, who represented Australia 67 times from, 1984-95.

"He's only been back 6-7 games and he's growing in confidence. He will definitely be a future Socceroo, no doubt.

"Whether Ange picks him for this World Cup, that's entirely his call."