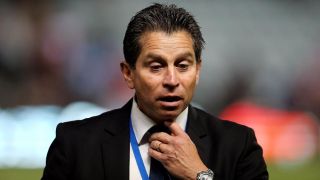 A disappointed Sydney FC coach Frank Farina has lamented his side’s lack of discipline as they went down 2-1 to Central Coast Mariners on Saturday in Gosford in round 21 A-League action.

The Sky Blues responded with purpose after falling behind to a 26th minute free kick to Mariners South Korean recruit Kim Seung-Yong.

Sydney could have scored on multiple occasions before their 62 minute equaliser to Richard Garcia but lacked the discipline with the ball and finishing nous as the Mariners pinched back the lead in the 75th minute via strike to Mitchell Duke.

Sydney FC falls to fifth on the ladder after the loss and hosts second-placed Western Sydney Wanderers next Saturday night at Allianz Stadium.

The NSL-winning coach was blunt in his assessment.

"That first half we were our own first enemies, we would win the ball but we would give it away too cheaply or too easily and that’s an area we are constantly saying we have got to improve and that’s coming down to either bad decision or bad passes and then we are on the back foot," Farina said.

"In the first half we wanted to keep possession and run them around coming off the week they have had (playing in Korea in the AFC Champions League) but we didn’t do that well enough.

"We were saying 'keep the ball, keep moving it from side to side, make them run and they will tire in the second half.

"But we turned over too much possession in that first half without any real pressure."

Farina also noted the contribution of the Mariners defence particularly goal-keeper Liam Reddy (who was axed by Sydney in April of 2012) who pulled off a terrific save from a 55th minute free kick from wiley Italian Alessandro Del Piero.

"I thought we come out in the second half and got ourselves back into the game," he said.

"When Liam Reddy gets three points (man of the match on Fox Sports coverage) I suppose that says a bit.

"I think in that final third we have got to improve in terms of most probably finishing and some decisions in there."

The former Socceroos boss was pleased with his half-time tactical change of bringing on Richard Garcia for Corey Gameiro.

"Richie is very experienced in that role, he is strong in the air as well.

"Most probably he is still a little bit off (playing) 90 minutes.

"As I said we weren’t holding enough possession we were losing it and he is someone who can hold it up and give us time to get the midfield forward and the defence forward as well."

Farina praised Garcia's classy angled goal "It was a very good finish, it was a great finish."

"We created enough chances there to warrant more than one goal.

"But as happens when you are pushing you are going to get opened up at the back.

"We went with three at the back when I bought young Alex (Urosevski) on as it was a game I wanted to get something out of."