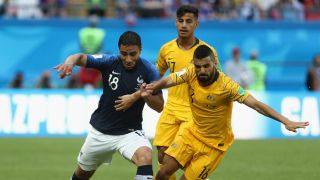 Lyon president Jean-Michel Aulas has revealed that he offered Nabil Fekir a contract extension after his proposed move to Liverpool fell through.

The 24-year-old France attacker was reportedly close to joining Jurgen Klopp's side before the World Cup began, only for Lyon to declare they had pulled out of a proposed deal.

Fekir's agent, though, has since indicated a transfer could yet be completed, while new Real Madrid head coach Julen Lopetegui is reportedly interested in taking him to the Santiago Bernabeu.

Speaking to Le Parisien, Aulas has revealed that Lyon are under no pressure to sell Fekir and want him to commit his long-term future to the club.

"I spoke with Nabil Fekir the day after the night when we decided to stop negotiations with Liverpool," he said.

"He was very calm. I immediately said to him that if he wanted to stay, we could do an extension.

"I've said it before, we don't need to sell. We have the capacity to keep Fekir.

"The current plan is to let nobody leave, to have the best team possible and to make signings as previously planned."

Fekir has come off the bench in France's two World Cup games so far and will be hoping to start their final Group C game against Denmark on Tuesday.