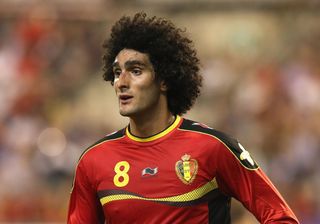 The 25-year-old Manchester United midfielder missed his club's 2-1 Premier League win over Sunderland at the weekend and subsequently underwent scans on his injured wrist.

He remains part of Belgium coach Marc Wilmots' plans, although his national boss has claimed Fellaini will require surgery at some stage.

Regardless, he is set to feature in his country's crucial World Cup qualifying clashes with Croatia on Friday and Wales on Tuesday.

"Marouane Fellaini has trained with Belgium wearing a protective cast on his injured wrist," a United statement read.

"Although some reports suggest the midfielder faces an operation and a spell on the sidelines, the deadline-day arrival is due to play in a splint against Croatia and Wales in the World Cup qualifiers."

Belgium will travel to Zagreb to face Croatia and a point will be enough to seal their spot in Brazil 2014.