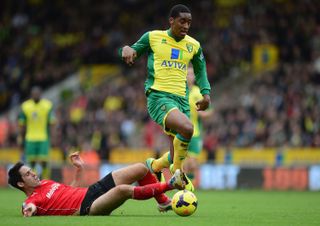 Norwich had been frustrated throughout their Premier League clash and had seen Cardiff goalkeeper David Marshall deny them on numerous occasions.

Cardiff put the ball out of play in stoppage time after Alexander Tettey had gone down injured, and when the subsequent throw-in was taken, Fer was expected to pass the ball back to Marshall. However, he rolled the ball into the open goal.

With the score 0-0, the Netherlands international revealed he had put the ball into the net because he wanted to win the game.

"I meant to score, I wanted to win the game," he told talkSPORT. "In this situation I just wanted to score because it was a 0-0 draw.

"In Holland if they throw the ball away and you want to play on, you can play on. I see now that in England it's different.

"Next time I'll make sure I give the ball back to the keeper."

Fer's effort was ruled out by referee Mike Jones, despite the apparent absence of any infringement.

The midfielder explained he had been told by Jones the goal had been disallowed because the official had not blown his whistle to signal for the throw-in to be taken.

"The referee said he didn’t blow his whistle. That’s the reason why he didn’t let the goal count," Fer added. "But normally you don’t blow the whistle for a throw in, which is why I went for goal."