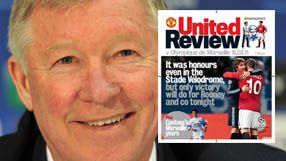 The tie remains delicately poised at 0-0 after both sides played out a tense stalemate in the Stade Vélodrome. Ferguson favoured caution in his approach that day, but the United manager insists the Premier League leaders will take the game to their French opponents this time around.

Writing in his column in the pre-match programme, the 69-year-old Scot says: “We will be going for it.

"We have to following the goalless draw in the first leg in Marseille and I guess the French will be adopting similar tactics as we both strive to get through the first knockout round to reach the quarter-finals of the Champions League.

“Happily it suits our style of play because we are an attacking team and the requirements of the night sit well with our philosophy of the game. We risk losing a goal but we are playing at Old Trafford and I am counting on our good record at home to see us through.”

Ferguson’s confidence in his side’s ability to see off the French champions is partially borne out of the fact that United have won 17 of the 20 matches they have played at home this season, and the United supremo believes the atmosphere created by the Old Trafford faithful could play a crucial role in continuing that record.

“I was disappointed not to get a key away goal last month in the Stade Vélodrome, but even though we failed to score I enjoyed the game,” he says. “The pitch was lively, their fans were terrific and I liked the atmosphere.

“Now we must show our visitors, as we welcome them to Old Trafford, that our ground can be just as volatile.”

The United manager is also looking for a reaction from his players to the accusations of Marseille manager Didier Deschamps that the Red Devils’ current side lacks the ‘fantasy’ of the treble-winning class of 1999.

“I hope also that we can show Deschamps that despite his suggestion that our present side doesn’t have as much ‘fantasy’ compared with our team of a few years ago, we are still capable of producing our fair share of magic,” he says.

“I take his point because the side that captured the unique treble was something quite special, but don’t underestimate the boys of today.

“At times our football at Old Trafford has been fantastic and hopefully tonight we will be able to show Didier and his team that we can still put on the style.”

Read Sir Alex Ferguson's column in full in Tuesday's edition of United Review ahead of the Red Devils' Champions League tie with Marseille at Old Trafford, priced at £3 in and around the ground. To subscribe, call 08456 777801 or visit www.themagazineshop.com