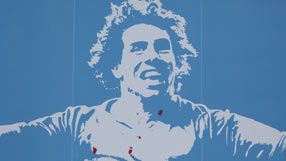 The United boss branded City’s infamous ‘Welcome to Manchester’ poster - which was put up after striker Carlos Tevez’s defection from red to blue 16 months ago – as "stupid" and "embarrassing."

Looking ahead to Wednesday's crunch derby at Eastlands, he said of the city centre poster: “I don’t know how it was created, probably some advertising gimmick at City.

“But I don’t think they can be proud of it. I said it was stupid at the time. They probably think that now.

“I don’t see how they thought it would get more points off us when it came to playing on a football pitch.

“Maybe it was worthwhile for some of the supporters but I think a lot of them were embarrassed. They would rather see that trophy being paraded through the city before they start screaming from the rooftops.”

Despite his frustration, Ferguson admitted he cannot wait to lock horns with City again in what promises to be a fiery midweek clash, after the teams were involved in four epic encounters last season.

“These games are fantastic,” Ferguson said. “You’re involved in a game of great emotions with a full house.

“These are the games you want to be involved in. There’s an incredible intensity in the derby game now, which wasn't there 10 or 15 years ago. They are far more consistent now and far more solid.”

Wednesday’s match could go a long way to defining both club’s respective seasons.

For City, who are now a genuine threat to their local rivals thanks to the billions of owner Sheikh Mansour, a win would draw them level on points with United.

For the Red Devils, victory - coupled with a defeat for Chelsea - will see them go top of the table.