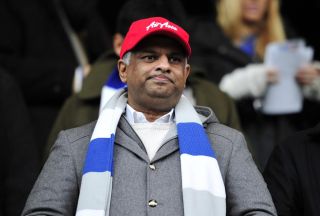 The duo have been involved in a war of words after Redknapp criticised the professionalism of the Moroccan midfielder in the wake of Sunday's 3-2 defeat to Liverpool.

Having been labelled "not fit to play football" and "about three stone overweight" by Redknapp, Taarabt hit back in an interview with the Daily Mail on Monday, in which he questioned his manager's training methods and insisted he had not gained weight.

The row continued on Tuesday, with Redknapp telling The Sun that Taarabt is "the worst professional I have ever come across".

Fernandes has now informed both men of his disappointment and issued an apology to QPR supporters for the embarrassment caused.

"As a club, we are fully aware of stories in the press over the last few days regarding Harry Redknapp and Adel Taarabt," read a statement from Fernandes on QPR's official website.

"We regret these issues being played out in public and both Harry Redknapp and Adel Taarabt have been notified of our disappointment regarding their handling of the situation. I have spoken to them both personally.

"On behalf of the club, I would like to apologise to the QPR supporters for the embarrassment this has caused and confirm that the issue has been dealt with internally.

"The club's entire focus is now on the Aston Villa fixture next Monday and hopefully after a tough few days we can turn a negative into a positive and build on Sunday’s improved display."

In a subsequent tweet, Fernandes added: "All I want [is] to focus on villa. its time for all to put qpr first."