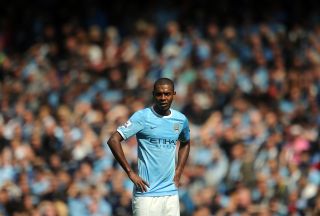 City paid a reported £30 million to take the midfielder from the Donbass Arena in June, and he has since established himself as a key part of Manuel Pellegrini's side.

Fernandinho, who last played for Brazil in 2012, was handed a first call-up by Luiz Felipe Scolari for his country's friendly against South Africa on March 5 - meaning he is well placed to earn a spot in their FIFA World Cup squad.

"I arrived at home after training, and the telephone began to ring," said the 28-year-old. "I was really anxious to find out if my name was on the list. It was an immense joy for me.

"It's a big challenge for me. If I get the opportunity to show what I can do, I'll do my best to be on the final list for the World Cup."

And Fernandinho, who hopes to have recovered from his muscular injury in time for City's UEFA Champions League last-16 first leg against Barcelona next week, believes the added exposure of playing in the Premier League was key to him catching Scolari's eye.

"The move was very important for me," he said. "I have grown a lot as a player, but I can't speak badly of the Ukraine as I had good times there.

"What I did there is done, in the past, and now I'm in a good phase here at City. I've grown in every way.

"Here the exposure is much greater and perhaps this is the reason I've been called up to the national team."