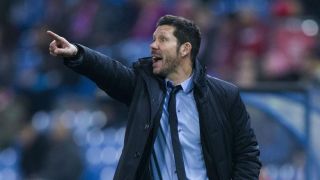 Both Atletico and rivals Real Madrid were handed the sanctions by FIFA's Disciplinary Committee on Thursday after being found to have breached regulations "relating to the international transfer and registration of players under the age of 18".

Barcelona received a similar punishment in April 2014 and, like the Spanish champions, Atletico and Madrid vowed to appeal against the ban that prohibits the registering of players during the next two complete windows.

As the league leaders prepare for Sunday's visit to Las Palmas, Simeone told reporters: "The club will appeal and they have a week to handle that.

"I just focus on tomorrow's game. I will not get worn down by other situations in January because several things can happen on appeal."

Atletico travel to Gran Canaria off the back of three consecutive La Liga wins, with Antoine Griezmann's form in particular maintaining the leaders' title ambitions.

With the Frenchman boasting nine goals in his last 10 outings, Griezmann has ensured himself a regular place in Simeone's plans despite plenty of competition up front.

"Our plan is just to focus on ourselves and find what suits us best for each match," Simeone added. "No other thoughts, just keep regularly improving and that is our aim.

"We have young players growing, and that makes the team progress. Griezmann adapts to different players - he has been fine with [Mario] Mandzukic, Fernando [Torres], Jackson [Martinez] or [Luciano] Vietto.

"Due to their pace, Antoine and Luciano can play in a similar way. Jackson is more aerial, Luciano is less selfish in front of goal... Griezmann has responded with all the guys who he has played with.

"When he arrived, he almost always played on the left but I always saw that he needs to play with total freedom. He has great physical strength and he knows where he can hurt opponents.

"He has many virtues, speed, heading, shooting - he is a very complete player and he has added consistency."