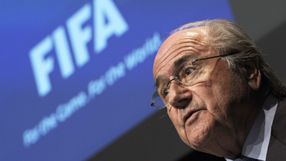 Four other officials were also banned and fined in an unprecedented move by football's world governing body, which has been shaken by the case and is under huge pressure to show that the contest will be clean and transparent.

Nigerian Amos Adamu was banned from all football related activities for three years and fined 10,000 Swiss francs ($10,130) for breaches of five articles of FIFA's ethics code including one on bribery.

His fellow executive committee member Reynald Temarii of Tahiti, president of the Oceania Football Confederation, was banned for one year and fined 5,000 Swiss francs for breaching articles on general conduct and loyalty.

The others officials included Slim Aloulou, chairman of the committee that settles disputes between clubs, players and coaches, and the previously disgraced Ismael Bhamjee.

In 2006, Botswana's Bhamjee was sent home from the World Cup in Germany and subsequently quit the executive committee for selling match tickets at three times their face value.

A further claim by British newspaper The Sunday Times that some bidding countries were guilty of collusion before the December 2 vote in Zurich was dismissed by the ethics committee.

The decision means only 22 executive committee members, instead of the expected 24, will vote when FIFA chooses the hosts for the two tournaments.

"For as long as I am in the ethics committee, we will have a zero tolerance policy for all violations of standards," said its chairman Claudio Sulser after a three-day hearing.

He added: "The damage caused to FIFA's image is very great. When one talks of FIFA, there is generally a negative attitude out there, talk of corruption."

Adamu and Tahiti had been provisionally suspended following allegations by The Sunday Times that they offered to sell their votes to undercover reporters posing as lobbyists for an American consortium.

FIFA said Adamu and Temarii had breached general ethics rules as well as article 9.1 which demands "fiduciary duty" to the sport's governing body.

Adamu was also found to be in breach of article 11.1 which reads: "Officials may not accept bribes; in other words, any gifts or other advantages that are offered, promised or sent to them to incite breach of duty or dishonest conduct for the benefit of a third party shall be refused."