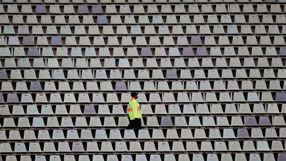 The London Olympics and Euro 2012 were both blighted by rows of empty seats at supposedly sold-out venues, frustrating fans and detracting from the spectacle for television audiences.

Sponsors will also be asked to give details of who is using their tickets, FIFA Marketing Director Thierry Weil said on Wednesday, adding that it was impossible to eradicate "no-shows" from ticket holders.

"The no-show is a bigger concern than the commercial side. Even with a resale platform, you will have people just not coming," Weil added.

An increasing number of European football clubs are doing deals with secondary ticketing companies to allow fans to sell seats online for matches they cannot attend.

Weil said FIFA, world football's governing body, would be testing its ticket systems during the Confederations Cup in Brazil in 2013, an event which is seen as a dry run for the World Cup.

He envisaged the ticket exchange being mainly used by international fans who decided not to travel to Brazil or had bought tickets for latter stages only for their team to be eliminated.

Brazil will announce ticket prices for the tournament next month and faces pressure to ensure that poorer people are not shut out of the tournament in a country where there are huge differences in wealth.

"The goal is to keep access for all the different groups of Brazilians," said Weil.