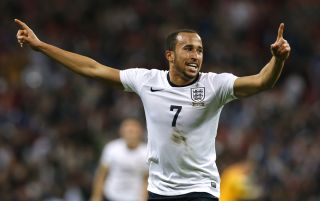 Wayne Rooney opened the scoring with his sixth goal in Group H on his return to the side and an own goal from Branko Boskovic doubled England's lead.

But it was Townsend who stole the show as the Tottenham winger added a third goal after Dejan Damjanovic had pulled a goal back before Daniel Sturridge scored a late penalty to leave England needing a win against Poland on Tuesday to secure their place at the showpiece in Brazil next year.

Defeat for Montenegro looks certain to have cost them a place at the World Cup, as second-placed Ukraine are three points better off than them with a far superior goal difference.

As well as handing a debut to Townsend, England boss Roy Hodgson opted to pair Liverpool striker Sturridge with Rooney in attack.

With the backing of a vociferous home crowd at Wembley, England started brightly and created several half-chances before Leighton Baines did well to win the ball back and pick out Welbeck from the byline, but the forward fired straight at goalkeeper Vukasin Poleksic at the near post.

Townsend was causing all sorts of problems and he raced away down the right and cut in to shoot straight at Poleksic, who palmed the ball invitingly into Rooney’s path, but the striker could only fire into the side-netting from a tight angle.

But Rooney made amends for that miss just two minutes into the second half when he put England in front.

Townsend was the architect, driving down the right before providing a cross that a defender headed into Welbeck’s path and although the onrushing forward’s shot was saved by Poleksic, Rooney was on hand to tuck the ball home from six yards.

England then doubled their lead in bizarre fashion after 61 minutes, when Welbeck raced into the box and fired the ball across the box and Boskovic toed the ball into the far corner of his own net.

Jovetic was unfortunate not to pull a goal back almost immediately when his vicious right-foot drive from 25 yards out rattled the crossbar.

But the visitors did make a game of it with 18 minutes remaining when Damjanovic diverted Fatos Beciraj’s shot into the far corner.

England were not to be denied though, and Townsend added a third with a fine right-foot drive from 20 yards with 12 minutes remaining, before Sturridge put the icing on the cake with a penalty in stoppage time after he was upended close to the byline by Ivan Kecojevic.