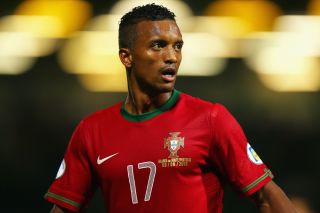 Tuesday's game had become somewhat of a formality with Portugal sat three points behind Russia, who picked up a group-winning point at fourth-placed Azerbaijan, following a disappointing 1-1 draw away to Israel on Friday.

After managing to keep Portugal out for almost half an hour, the visitors' task was made near impossible by Aurelien Joachim's red card, with Silvestre Varela and Nani hitting a quick-fire double to move Portugal ahead.

With the hosts having little to play for, Luxembourg rallied in the second half, but they were put to bed by Helder Postiga's late third.

Paulo Bento made five changes to the side held by Israel, while Nani was named captain in the suspended Cristiano Ronaldo's absence.

Requiring Russia to slip up as well as a swing in goal difference, the home side were quick out the blocks and dominated.

Visiting goalkeeper Jonathan Joubert saw Varela head over in just the third minute and had to be alert after saving Nani's long-range effort to tip away Postiga's follow-up.

Postiga had the ball in the net, but was called offside, Fabio Coentrao nodded onto the crossbar and Nani's header was fantastically saved by Joubert as Portugal turned the screw.

And the pressure seemed to get to Joachim, who was rightly dismissed on 28 minutes for a studs-up tackle on midfielder Andre Almeida.

The hosts made the advantage count just two minutes later. Joao Moutinho threaded a perfect throughball to Varela, who raced clear, took the ball away from Joubert and tapped into the empty net.

And they doubled the lead after 37 minutes with Moutinho again the creator. Nani played the ball into the Monaco man, who returned it to his captain with a neat back-heel and the winger smashed his finish into the roof of the net.

Joubert and an offside flag denied Josue and Coentrao respectively as the hosts had to settle for a two-goal buffer at the break.

The tempo dropped drastically in the second half, although Varela remained a threat on both flanks with some surging runs and dangerous crosses.

Lars Krogh Gerson had the visitors' brightest moment just after the hour mark with a sweetly struck half-volley, but it was straight at Rui Patricio.

That perhaps gave Luxembourg confidence and the Sporting Lisbon keeper was forced to scramble across his goal to see Tom Laterza's ambitious shot from the right touchline wide.

But Portugal wrapped up the win in the closing stages, substitute Hugo Almeida flicked Josue's cross to Postiga, and the Valencia striker slotted underneath Joubert to give the hosts confidence heading into November's play-offs.