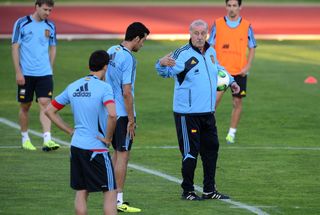 The reigning world and European champions are yet to confirm their place at Brazil 2014, but victory in Mallorca would mean they require just a point from their final Group I match against Georgia next week to secure automatic qualification ahead of France.

The two nations are level at the top of the group with 14 points, but Spain have a superior goal difference while France have played a game more, meaning Vicente del Bosque's men are almost assured of being able to defend their crown in South America next year.

And Spain will fancy their chances of putting themselves on the verge of progression, as Belarus are bottom of Group I with just four points from their seven matches.

Georgi Kondratiev's side have only won once during this qualifying campaign and were beaten 4-0 when the two sides met in Minsk in October 2012.

Spain have called up Swansea striker Michu and Sevilla defender Alberto Moreno to their squad for the first time to replace the injured David Villa and Jordi Alba, and the former has spoken of his desire to be involved on Friday.

"For any footballer, playing for the national team is as good as it gets, it's the biggest achievement of my career," the 27-year-old said.

"I was a bit nervous coming here but once you get on to the pitch everything is much easier.

"Right now I am just enjoying the training sessions. For me it's a gift being here with some of the world's best players and I am ready to play wherever the coach sees fit."

Belarus boss Kondratiev has seen his side conceded the most goals in the group - 14 - but insisted his side are travelling to Spain intent on playing attacking football.

"We are going to try not going on the defensive, not to 'park the bus', as they say," he said.

"We will try to play our game based on rapid counter attacks.

"We will try to play like we did against France, which was a 3-4-3 formation, not 4-5-1 as some said, as our full-backs are very attacking and are really like forwards."

Belarus will be without star player Alexander Hleb through suspension though, while Edgar Olekhnovich is unlikely to be involved due to injury.

Del Bosque, meanwhile, has minor doubts over Gerard Pique and Andres Iniesta after the Barcelona duo were not involved in training on Tuesday.