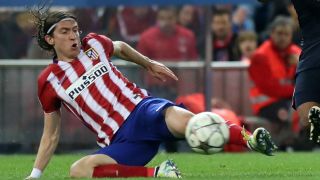 Spain Under-21 international Saul sauntered past a clutch of Bayern challenges before clipping a shot into the bottom corner after 11 minutes at a raucous Vicente Calderon.

Atleltico's trademark tenacity made for an uncomfortable opening half for Bayern, who improved after the interval but could not come any closer than David Alaba's long-range strike crashing off the crossbar.

The defining moment of Saul's breakthrough season puts Diego Simone in prime position to clinch a return to the final they lost in 2014 in next week's second leg at the Allianz Arena.

"He is in a brilliant moment," Filipe Luis told BT Sport. "He is a really good guy, young, has his feet on the ground.

"I think his character helped him to score that goal. It was beautiful football, one of the best goals in this Champions League. We hope he goes higher and higher with this team."

The full-back was delighted by Atletico's result against Pep Guardiola's team, but cautiously forecast that the tie remains in the balance.

"We are really happy, but we know nothing is done yet. The tie is totally open," he added.

"I could say it's 50-50 because at home they are really strong. They play wider, their pitch is really fast and they are going to have a lot of chances

"We have to be humble and reach our best level to get to that final, which is our dream."