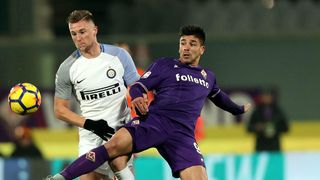 Inter failed to arrest their slump in form as Giovanni Simeone's 91st-minute strike earned Fiorentina a 1-1 draw and sent the Nerazzurri into the mid-season break winless in five Serie A matches.

Club captain Mauro Icardi's second-half goal looked set to be enough to get Inter - who have slipped from the summit to third after their 16-game unbeaten start to the campaign ended - back on track, but Simeone dashed those hopes at the death.

Luciano Spalletti's side now face the prospect of staring at a nine-point gap to Napoli, who play Verona on Saturday, during their two weeks off.

Fiorentina, themselves enduring a poor run having now won just two out of the last 10 in Serie A, had the better of the chances in the opening period, but Icardi converted for the eighth time in his last four against the Viola early in the second half.

Inter retreated into their shell and only stayed ahead thanks to the sensational stops Samir Handanovic made from Cristiano Biraghi and substitute Khouma Babacar.

But Handanovic's goal was breached at the death, Simeone following up his goal against AC Milan at the weekend by slamming home at the near post to earn the hosts a share of the spoils at the Stadio Artemio Franchi.

| Fiorentina 1-1 InterIt ends at the Franchi after Simeone cancelled out 's strike in stoppage time.January 5, 2018

The lack of confidence discussed by Spalletti in the build-up was evident from the off as Fiorentina set out to attack Inter with speed.

It took Stefano Pioli's side less than two minutes to threaten Handanovic's goal, but Simeone was unable to divert Davide Astori's flick-on home.

Federico Chiesa curled wide before bursting down the right and feeding Cyril Thereau, who failed to make the most of a slip from Andrea Ranocchia and blasted over.

It was not until the 22nd minute that Inter forced Marco Sportiello into action. The goalkeeper got down at his near post to push a cross-shot from Ivan Perisic behind, and from the resulting corner he was forced to back-pedal and tip Joao Cancelo's delivery over.

Thereau wasted another golden opportunity ahead of the half-hour mark, while Vincent Laurini did enough to put Icardi off in his attempt to volley a looping cross from the right.

There was no stopping Icardi when he broke the deadlock 10 minutes after the restart, though. The Argentina international saw his header saved by Sportiello but showed rapid reactions to slot beyond the keeper at the second attempt.

Fiorentina responded well and a phenomenal diving save from Handanovic kept Biraghi's fierce free-kick out of the top-left corner.

Spalletti signalled his intention to try to see out the win by replacing Joao Mario with Dalbert, a move that invited pressure from the hosts.

Babacar came on for Marco Benassi in the 69th minute and, after Inter lost Ranocchia to injury, he went close to having a telling impact.

The Senegalese controlled a cross from Biraghi on his chest and produced a beautiful overhead kick that Handanovic did superbly to leap to his right and push over.

Recognising the pressure on his team, Spalletti sent Antonio Candreva on for Cancelo and the winger wasted a glorious opportunity to put the match to bed four minutes from time when he rounded Sportiello, only to find the side-netting from an acute angle.

Inter were made to rue that missed chance in the final moments, as Biraghi's deflected shot fell to Valentin Eysseric, who poked to his right for Simeone to thump home a goal that leaves both sides stewing over poor form during the break.