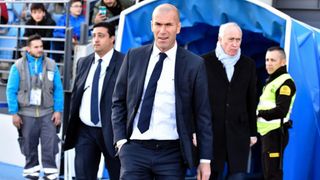 Zinedine Zidane was handed the reins at Real Madrid on Monday and must now revive an ailing campaign that was threatening to come off the rails under Rafael Benitez.

Madrid sit third in La Liga and are through to the last 16 of the Champions League, but expectations are high at the Santiago Bernabeu and the World Cup-winning Frenchman has some major issues to address.

Here we take a look at five key problems the club legend must solve if he is to add coaching success to his many playing honours.

Get the fans back on side

The clouds were gathering for Benitez for a number of weeks before president Florentino Perez finally decided to act, with even a 10-2 demolition of Rayo Vallecano not enough to keep white hankies in Santiago Bernabeu pockets for long.

Supporters quickly grew tired of what they considered to be the negative style of play implemented by Benitez, while a refusal to use fan favourites Isco and James Rodriguez with any regularity and a failure to beat Atletico Madrid or Barcelona incensed them still further.

Zidane is a hugely popular figure in Madrid and his reputation will give him a head start, but fans will hope he can instill a similar style of play to that which he practiced himself.

Benitez upset plenty of people associated with the club when, early on in his spell, he refused to name Cristiano Ronaldo as the best player he has coached. A falling-out on the training pitch only further increased the tension between coach and star player and the dressing-room fractures have remained ever since.

James Rodriguez has been in and out of the side since returning to fitness, club captain Sergio Ramos publicly questioned the decision to substitute Karim Benzema in the 1-1 draw with Atletico, and Isco's marginalisation from the team has reached such a point that a January move to Manchester City has been rumoured.

Zidane already carries a substantial amount of respect within a notoriously volatile senior squad; maintaining that aura to keep the players content and willing to work will be essential.

Zidane was the quintessential 'Galactico' as a Madrid player; his Champions League final volley in 2002 now the stuff of legend among the club's faithful. Getting Madrid to play in such a stylish mould will prove vital.

Benitez may have overseen 10-2, 8-0 and 6-0 wins this season, but fans grew increasingly frustrated at what they considered a negative tactical approach, especially against the bigger teams. Even a 1-0 win over Paris Saint-Germain (the French champions' only defeat to date in 2015-16) was met with discontent given the amount of defending they were forced to do.

Carlo Ancelotti delivered La Decima and the Club World Cup by marrying his trumpeted "balance" with an attractive, forward-thinking approach designed to maximise the impact of the 'BBC' attacking trident. If Zidane is to emulate any recent Madrid coach, it must be the Italian.

Benitez won 11 of his 18 Liga matches in charge and five from six in the Champions League, but a failure to land the knockout blow against heavyweight opponents cost him dearly. Away draws with Atletico, PSG and most recently Valencia, along with defeats to Villarreal and Sevilla and a 4-0 humiliation by Barcelona left too many question marks over the former Liverpool boss' ability to beat the big teams.

Zidane faces a reasonably favourable early run of games in charge, but his credentials will be sorely tested soon enough, with Madrid facing Atletico, Celta Vigo, Roma, Sevilla and Barcelona between February 28 and April 3. Victories in those games are a must if he is to restore some pride among supporters and keep the trophy hunt alive.

Make the most of the January window

Benitez stated before the draw with Valencia that rediscovering "balance and resilience" was crucial, but it was an admission that came too late. Madrid's soft centre was exposed too often in the first half of the season, most notably by an inspired Andres Iniesta at the Bernabeu, and persistent changes in personnel failed to rectify the problem.

Mateo Kovacic's big-money move from Inter raised some eyebrows, but the Croatian was never a natural fit to add steel to midfield alongside Luka Modric and Toni Kroos, while Casemiro – for a while trusted as the lynchpin in Benitez's formation – has yet to recover form after being dropped following the 3-2 loss to Sevilla in November.

Zidane enjoyed the benefits of playing alongside Claude Makele in Madrid's midfield and exploring options to add a similar combative player to the current squad could prove a masterstroke. January is a notoriously difficult time to land key signings, but the lure of Madrid can never be underestimated. Villarreal captain Bruno Soriano has been exemplary at the heart of his side this season and even claimed after the win over Madrid that Sergio Ramos had implored him to join the club. A recall for Marseille loanee Lucas Silva has also been mooted.