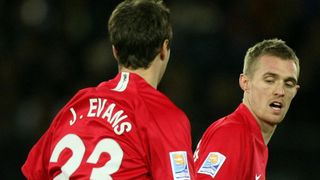 The Northern Ireland defender completed a move to West Brom on Saturday after Tony Pulis' side had picked up their first Premier League victory of the season at nine-man Stoke City.

Evans is set to join a host of former United players at West Brom, with Fletcher, Ben Foster and James Chester already part of Pulis' squad.

And having played alongside the centre-half for many years, Fletcher believes West Brom have pulled off a notable coup.

He told the club's official website: "Jonny is a fantastic player, a great leader. He is a top player. He has been at Manchester United for a long time.

"He has had a few injuries in the last few years which maybe stunted his progress in that respect. But if he gets a run of games you are going to see a real top-class player.

"I'm delighted he is at West Brom because I can't speak highly enough of him. He is a top-class centre-half."