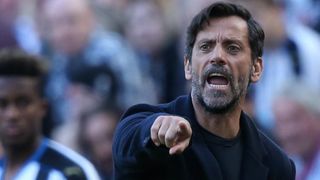 Newly-promoted Premier League outfit Watford have over 20 different nationalities in their squad, with just as many different languages being spoken by the players.

Only three English players are on Watford's senior list, but Spanish manager Flores has hailed their impact on controlling the dressing room.

"The English players [such as Deeney and Watson], are good players at managing the dressing room," Flores said.

"We have [Sebastian] Prodl also, we have a lot who can lead the team. Sometimes I like to take separate players - not always leaders - sometimes you feel you need to talk with other players, separate.

"Sometimes when you are talking with the players one meeting with one player is more valuable than 50 training sessions together.

Watford face fellow newcomers Bournemouth on Saturday as they look for their third win of the season.