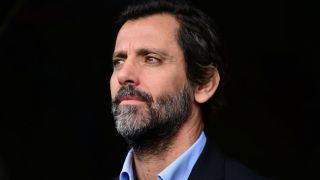 The Hornets climbed into the top half as a run of four consecutive defeats came to an end at Vicarage Road on Saturday, with Odion Ighalo and Craig Cathcart on target.

Newcastle grabbed a goal back through Jamaal Lascelles' header, but Flores' men held on for a deserved victory that moved them 11 points clear of the visitors.

"It was an amazing victory for us," Flores told Sky Sports. "The opening was very tough, We played really really well in the first half.

"The result I think is fair and I am very happy with the performance of the players."

Watford had lost to Tottenham, Manchester City, Southampton and Swnasea City to begin a slide down the table and Flores explained where the sudden dip in form had come from, having won six of the previous nine matches.

"We lost a little bit of our spirit, our very intense spirit we've shown throughout the course of the season," he said.

"The players are human beings. Sometimes they are tired and in this match we tried to change something.

"We tried to change to a new shape, it means a very fresh system for the players. We felt really comfortable for a long time.

"I say always, I love these players because you ask everyone at the start of the season, [they say] we are candidates for bottom of the league.

"Sometimes it is possible to take a bad run or a good run during the season but we are fighting normally every time.

"We have a lot of reasons to enjoy this experience."

Next up for Watford is a trip to Nottingham Forest in the FA Cup, while Chelsea await in the Premier League on February 3.