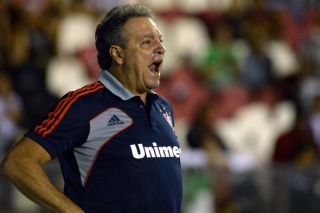 The 60-year-old led the club to the Campeonato Brasileiro Serie A title in 2012 - his first full season in charge since taking over from the sacked Muricy Ramalho.

However, a run of poor results this year have seen Fluminense flirt with the league's relegation places, while the Rio de Janeiro side have lost their last five outings.

Braga has enjoyed a lengthy and successful coaching career which has also included stints in Europe with the likes of Rio Ave and Marseille.

His greatest success arguably came in 2006 when he led Internacional to victory in the Copa Libertadores and FIFA Club World Cup.

In the meantime, the club's youth coachs are expected to oversee Fluminense's upcoming meeting with Cruzeiro.