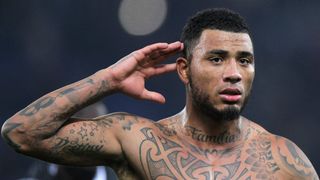 Colin Kazim-Richards is thrilled to have the opportunity to play at the same club as Ronaldo having signed a two-year contract at Corinthians.

Last week Corinthians announced the signing of Kazim-Richards from Coritiba, for whom he scored three goals in 21 Campeonato Brasileiro appearances last term.

The forward, known solely as Kazim in Brazil, is pleased to have joined the six-time national champions in Sao Paulo, claiming to have turned down offers from China and the United Arab Emirates.

Kazim-Richards said he was delighted with the chance to represent a club two-time Ballon d'Or winner Ronaldo turned out for in the twilight of his career.

"To play in the team that Ronaldo played is really good. I was born in London and never imagined playing for Corinthians, never in my dreams," he told a media conference.

"My objective is to help. This is the best club in the Americas. I came because it is my dream to play in a great club like Corinthians.

"I had offers from China and Dubai but I said that I wanted to play here. Winning a title with Corinthians would be really great.

"I have passion, heart, everything to play here. I would die for this shirt."

Corinthians are the 13th club of Kazim-Richards' career, which has included spells at Bury, Fenerbahce, Toulouse, Olympiacos and Feyenoord.