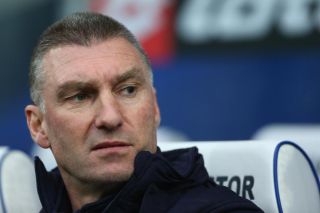 Nigel Pearson's men go into the match on a 19-match unbeaten run in the league, with their last defeat coming against Brighton and Hove Albion at the start of December.

Saturday's 2-0 win at fellow Premier League hopefuls Burnley saw Leicester open up a six-point gap ahead of their opponents to hand them a huge advantage in their automatic promotion bid, with just eight games remaining.

Wigan, however, should provide tough opposition on Tuesday, with the FA Cup holders enjoying a good season since Uwe Rosler replaced Owen Coyle as manager in December.

A 1-0 loss at QPR less than a fortnight ago represents their only defeat from their last 10 league games and that was followed by a 1-1 draw at Bolton Wanderers at the weekend.

Rosler has called for a big improvement from his players against Leicester as Wigan bid to remain in the play-off pack.

He said: "We had some experienced players out there who couldn't handle the derby situation and got nervous after they scored.

"We are disappointed in ourselves. We should have played a lot better from the start. As a ball-playing team we should have been better on the ball and at times we didn't cope with the physical side of things.

"But at the end I only thought there was one team on the pitch. We have to play better (against Leicester) on Tuesday because we're playing the best team in the division."

Elsewhere in the Championship, Leeds United have a brief distraction from their off-field turmoil when they host Charlton Athletic, with the visitors hoping to boost their chances of avoiding the drop, while Brighton head to Blackburn Rovers.

Wolves could also go nine points clear at the top of League One when they travel to bottom-of-the-table Stevenage on Tuesday.

Kenny Jackett's men were backed by a record-breaking 8,857 away fans in Saturday's 1-0 win at MK Dons and a victory over Stevenage could see them go further clear of Brentford, should they lose at Sheffield United the same day.

Peterborough United – fresh from winning the Football League Trophy on Sunday - will be hoping to avoid a third straight league defeat and remain in the play-off places when they entertain Colchester United on Wednesday, while Coventry City host Bradford City and Crawley Town travel to Port Vale.

League Two's only midweek fixture sees Bury hosting Bristol Rovers on Tuesday, with both teams looking to effectively secure their place in the division for next season.