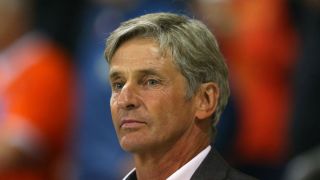 Jose Riga earned his first win since returning to Charlton Athletic as they routed fellow Championship strugglers Rotherham United 4-1 at the New York Stadium on Saturday.

Charlton had failed to win their last 11 league matches, a run that prompted the club's hierarchy to re-appoint Riga this month.

Makieno's second stretched Charlton's lead and luck was with the visitors when Rotherham's Jonson Clarke-Harris blazed a 74th-minute penalty high into the stands.

Charlton made Rotherham pay as Ademola Lookman completed the rout to earn Charlton a first win since November, leaving them a point adrift of safety.

Peter Whittingham scored twice as Cardiff City earned a 3-2 victory at Huddersfield Town to move within three points of the play-offs, while in the Championship's other match Birmingham City drew 0-0 at lowly Bristol City but still moved back into the top six.

In League One, leaders Burton Albion lost for the second time in three games as Rochdale ran out 2-1 winners at Spotland.

Callum Camps and Ian Henderson were on target for the hosts and, although Lucas Akins ensured a nervy ending by halving the deficit in the 78th minute, Rochdale hung on.

Gillingham failed to move level on points at the top, though, as they slipped to a 1-0 win at Blackpool, who extended their unbeaten run to four matches.

Wigan Athletic subsequently moved to within two points of automatic promotion with a comfortable 3-0 win over Port Vale at the DW Stadium.

Plymouth Argyle failed to score in a home league match for the first time this season as they lost 1-0 to Wycombe Wanderers and spurned the chance to leapfrog Northampton Town at the top of League Two.

Gozie Ugwu's strike secured the points for Wycombe, who were forced to play 46-year-old coach Barry Richardson for 75 minutes of the match after Alex Lynch was forced off at Home Park - marking his first league appearance since 2005.

Jack Compton notched a hat-trick to fire Yeovil Town to a 3-2 win against AFC Wimbledon to pull his team three points clear of the relegation zone.