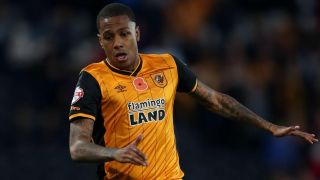 Hull City went top of the Championship after picking up a 1-0 win away at struggling Fulham.

Leading scorer Abel Hernandez, who has 15 goals for the Tigers this season, scored an 80th-minute penalty after Lasse Vigen Christensen fouled Moses Odubajo, and the victory took Hull a point clear of second-placed Middlesbrough.

Nottingham Forest were 1-0 winners at the Riverside Stadium as the hosts lost their second consecutive league match.

Forest, who are unbeaten in domestic competition in their last 12 games, scored when Ben Osborn set up James Ward to slide the ball past Dimi Konstantopoulos, ending Boro's run of 851 minutes of play without conceding on home turf.

Bolton enjoyed a respite from the financial catastrophe engulfing their club as they beat MK Dons 3-1 at the Reebok Stadium to claim only their third Championship win of the season, while fellow strugglers Charlton Athletic were held 1-1 by Blackburn Rovers at The Valley.

In League One, Gillingham went top of the table after beating Peterborough United 2-1, while Burton Albion slipped to a 2-1 defeat at home to Shrewsbury Town.

Barnsley's excellent form continued as they trounced Rochdale 6-1 at Oakwell, with Sam Winnall scoring a second-half hat-trick, and Millwall moved into the play-off positions after beating Chesterfield 2-1 at the Proact Stadium.

Northampton Town extended their lead at the top of League Two after beating Morecambe 3-1 at Sixfields, while second-placed Plymouth Argyle were held 1-1 by Bristol Rovers.

The Cobblers have a game in hand over their closest rivals, as do third placed Oxford United, who beat Portsmouth 1-0 at Fratton Park.

At the other end of League Two, Yeovil Town dragged themselves out of the relegation zone with a 2-1 win over Crawley Town, while bottom club York City drew 1-1 at Carlisle United and Newport County came from two goals down to draw with Dagenham and Redbridge.