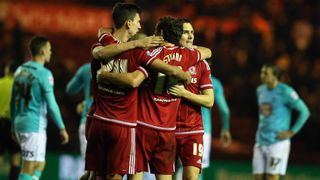 Middlebrough have a four-point cushion at the top of the Championship after two late goals saw them beat second-placed Derby County 2-0 at the Riverside Stadium.

The closely fought, top-of-the table clash was settled by two goals in two minutes in the closing stages, with George Friend turning home from close range after Albert Adomah thrashed Aitor Karanka's side into the lead.

Burnley missed the chance to move fourth after being held 0-0 at home to Ipswich Town, with Sheffield Wednesday now just two points off the play-offs after Ross Wallace's long-range belter sealed a 1-0 win over Fulham.

Second-half goals from Joe Lolley and Mustapha Carayol condemned bottom-club Bolton Wanderers to a 2-0 loss at home to Huddersfield Town, while Chartlon Athletic moved a point closer to safety after Simon Makienok secured a 1-1 draw at home to Nottingham Forest.

Rotherham United remain in trouble after a 94th-minute own goal by Jonson Clarke-Harris saw them lose 2-1 at Preston North End, and Anthony Kay turned into his own net to give Leeds United a 1-1 draw at home to MK Dons. Reading and Cardiff City beat Bristol City and Blackburn Rovers 1-0.

Lee Novak hit a hat-trick as Chesterfield hammered Shrewsbury Town 7-1 in League One, while Coventry City thrashed Crewe Alexandra 5-0 away thanks to a treble from Adam Armstrong.

Burton Albion and Gillingham remain a point apart at the top after home wins against Blackpool and Bradford City, but Sean O'Driscoll suffered his first Walsall defeat after a damaging 3-0 home reverse to Rochdale.

Fleetwood Town beat Bury and Oldham Athletic drew with Colchester United, while Port Vale's clash with Swindon Town was called off due to a waterlogged pitch.

Plymouth Argyle remain top of League Two thanks to a 2-0 win at Carlise United, with Northampton Town hot on their heels in second after they dispatched Barnet 3-0.

AFC Wimbledon moved above Cambridge United with a 4-1 away win, Oxford United triumphed 4-2 at Notts County, and Wycome Wanderers' loss to Morcambe allowed Accrington Stanley to close to within a point of sixth with a 3-2 win at Mansfield Town.

There were also wins for Bristol Rovers over Luton Town, Dagenham and Redbridge away to Exeter City and Portsmouth against Crawley Town, while York City are now bottom of the table thanks to a 1-0 defeat at fellow strugglers Yeovil Town.

Stevenage and Leyton Orient drew 2-2, with Newport County against Hartlepool United postponed after a pitch inspection.