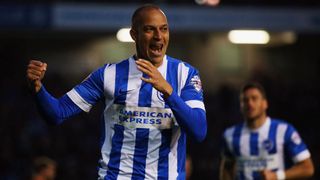 Brighton and Hove Albion moved back top of the Championship on Saturday on a day when Gillingham passed on the opportunity to take charge of League One.

The south-coast club got off to a great start when Solomon March opened the scoring after 17 minutes, but Jon Toral quickly pegged them back.

Brighton icon Bobby Zamora restored their advantage soon after the interval – scoring for the second consecutive match – and it proved enough for a 2-1 win to send them two points clear of Middlesbrough, who rose to second following a 2-0 triumph at Huddersfield Town.

At the opposite end of the table, Rotherham United secured back-to-back victories for just the second time this season courtesy of 3-0 success at home to Bristol City.

Burnley battled from 2-0 down to earn a 2-2 draw at Cardiff City, Ipswich Town dispatched struggling Charlton Athletic 3-0 and Nottingham Forest came from behind to defeat Reading 3-1.

In League One, leaders Coventry City were held to a 2-2 draw at home to Doncaster Rovers, twice throwing away the lead at the Ricoh Arena.

Adam Armstrong's 13th goal of the season gave Tony Mowbray's side the advantage, but a Nathan Tyson double cancelled out both his and John Fleck's strikes.

However, second-placed Gillingham were unable to take advantage as their meeting with Shrewsbury Town also ended 2-2.

Burton Albion's 5-1 hammering of Colchester City – who have now lost five league outings in a row – saw them close the gap on the top two, while Swindon Town and Peterborough United secured 4-0 wins at Chesterfield and Scunthorpe United respectively. Defeat for Chesterfield - a fourth on the bounce - prompted them to part company with manager Dean Saunders.

Wins for struggling Blackpool and Crewe Alexandra mean that just three points separate bottom side Barnsley from Fleetwood Town, six places above them.

Oxford United displaced Plymouth Argyle at the top of League Two, with Danny Hylton's second-half strike earning a 1-0 win away at Hartlepool United.

Oxford sit above the Devon side – who left it late to take a 1-1 draw away from Dagenham and Redbridge – on goal difference, while Northampton Town joined the pair on 40 points by overcoming Yeovil Town 2-0.

Chris Whelpdale scored a hat-trick but missed one of Stevenage's two penalties against Morecambe, who could not avoid a 4-3 defeat despite a pair of late goals.