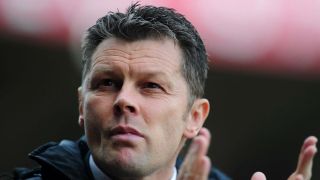 Steve Cotterill's side came into Tuesday's clash knowing victory would secure a return to the second tier - which they dropped out of two years ago - and they managed it in emphatic fashion.

Victory at home to Coventry City on Saturday will seal the title, after second-placed Preston North End drew 2-2 with Gillingham.

That allowed Milton Keynes Dons to close the gap to three points with a 3-0 win at Fleetwood Town, while Swindon Town also harbour hopes of automatic promotion following their 4-2 success at Rochdale.

Crewe Alexandra's 1-1 draw with Peterborough United moved them out of the bottom four, above Leyton Orient who lost 1-0 to Doncaster Rovers.

Notts County drew 1-1 with Barnsley but fellow strugglers Colchester United and Crawley Town were heavily beaten, 6-0 and 5-0 by Chesterfield and Walsall respectively.

In the Championship, the top three of Bournemouth, Norwich City and Middlesbrough all won - against Reading, Leeds United and Wolves - 1-0, 2-0 and 2-1 respectively.

At the bottom, Millwall gave their survival hopes a boost by beating fellow strugglers Wigan Athletic 2-0 in a game which saw three men sent off.

In League Two, Cheltenham Town gave their survival ambitions a shot in the arm by defeating Cambridge United 3-1, while Tranmere Rovers lost 1-0 at Mansfield Town and Hartlepool United drew 1-1 with Accrington Stanley.

At the top end of the table, fourth-placed Bury are still in with a chance of automatic promotion following their 1-0 win over second-placed Shrewsbury Town.

Wycombe Wanderers were able to maintain a four-point gap to Bury with a 2-1 victory over Exeter City, while Southend United's 2-0 win against Newport County keeps them in the hunt of going up.

Elsewhere, there were wins for Stevenage and York City, while the games between Oxford United and Northampton Town, plus Plymouth Argyle and Wimbledon ended 1-1.

Dagenham and Redbridge held Luton Town to a goalless draw.