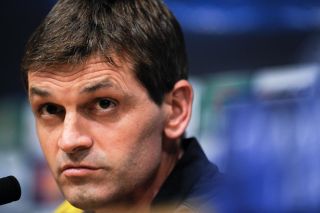 The Spaniard - assistant to Pep Guardiola during his successful stint in charge at Camp Nou - led Barca to the Liga title in his own right in 2013, though his only season in charge was heavily interrupted by his battle with cancer.

And, after reports in Spain suggested Vilanova had been rushed to hospital on Thursday, the club confirmed on Friday that he had lost his battle with the disease.

Vilanova's passing has prompted an outpouring of sorrow in the football world, with Barca president Josep Maria Bartomeu among the first to pay his respects.

"Tito Vilanova was a wonderful person, and will never be forgotten at FC Barcelona. Thank you for everything you taught us. Rest in peace," he posted on Twitter.

The leading light of Barca's success under Vilanova, Lionel Messi, posted his own tributes via Facebook: "A person hard to forget. I will always remember. All my love to the family of Tito."

Eric Abidal also fought cancer while playing for Barca under Vilanova and was another to pay his respects: "I always remember friend, RIP. Thanks for the fight. My love and support to his family."

El Clasico is one of the most fiercely contested fixtures in world football, but Vilanova's Real Madrid opposite number during his time in charge at Barca - Jose Mourinho - expressed his grief in the immediate aftermath of the news.

"Tito Vilanova’s passing is a sad day for football, for Barcelona and most importantly for his family and friends," he said. "On behalf of everybody at Chelsea Football Club I send my deepest condolences at this most difficult time."

Barca goalkeeper and vice-captain Victor Valdes hailed his abilities as a trainer: "Tito Vilanova, one of the best coaches I've had on my career. Thank you for all you have given us! RIP."

Real captain Iker Casillas added: "A very sad day for the world of football. RIP Tito Vilanova an example of strength and courage to all."

Cesc Fabregas, David Villa, Sergio Ramos, David de Gea, Xabi Alonso and Juan Mata were among the other leading Spanish footballing names to have paid tribute to Vilanova, and were joined by a host of clubs from around the world.