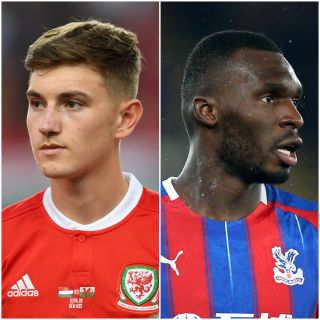 David Brooks has emerged as a midfield target for Liverpool, according to The Sun. The Wales winger had impressed at Bournemouth but missed most of this season due to an ankle injury and appears likely to leave following the club’s relegation from the Premier League. The Sun says the Reds are planning a £35-million move for the 23-year-old as Anfield boss Jurgen Klopp wants more width in the middle. But the Daily Star reports Liverpool face competition for his signature from Tottenham, West Ham and Everton.

Former Liverpool striker Christian Benteke has been put up for sale, says the Daily Mail. Crystal Palace want £8m for the Belgium international, who has scored just six league goals in his last three seasons. Palace are looking to offload the 29-year-old to get the funds to sign Watford forward Ismaila Sarr, 22, who the Hornets value at £40m.

The Sun reports Bournemouth’s Josh King  is being monitored by Paris Saint-Germain. But the striker is also wanted by a host of Premier League clubs and Serie A sides. The Cherries want at least £25m for the 28-year-old, who has indicated his first preference is to stay in the Premier League. But he has said his next aim is to play Champions League for a club in Europe and PSG, who have qualified for next season’s competition, could be a fit for the Norway international.

Konstantinos Tsimikas is close to signing with Liverpool but has yet to agree to personal terms with the club, according to the Liverpool Echo. The Reds have pulled out of talks for Norwich City defender Jamal Lewis, 22, so have moved to their alternative target of Tsimikas. The 24-year-old Olympiakos left-back has agreed on an £11.75m fee and will sort personal terms and a medical with Anfield doctors at the start of next week. Meanwhile, the Guardian reports Tsimikas is expected to sign with Arsenal.

Bernardo Silva: Barcelona want to sign the 25-year-old Manchester City midfielder and could include his fellow Portugal international Nelson Semedo, 26, in a possible deal, the Telegraph reports.