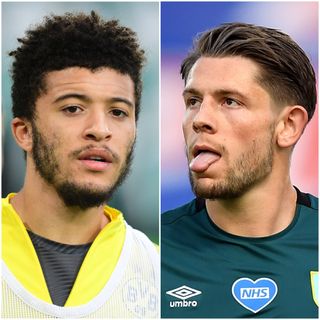 Jadon Sancho could be a step closer to leaving the Bundesliga for Manchester United, according to the Daily Express. The paper cites Norwegian journalist  Fredrik A N Filtvedt as reporting Old Trafford chief Ole Gunnar Solskjaer has spoken with the 20-year-old ‘several times’ about parting ways with Borussia Dortmund.

West Ham may be forced to come up with almost double their opening offer if they want to sign England international James Tarkowski from Burnley. The Sun reports the Hammers have offered about  £27 million for the 27-year-old, but the Clarets have said Manchester City paid  £40m for Bournemouth’s Nathan Ake and they believe their defender is worth significantly more. Meanwhile, Tarkowski has told The Daily Telegraph he feels “forgotten about” by England but hopes to be selected for national duty in the future.

Sheyi Ojo has not played for Liverpool since January 2017, prompting talk he could be about to again leave Anfield on loan. Championship teams Cardiff and Nottingham Forest have looked at the winger before, but the Liverpool Echo reports both the Reds and Ojo consider the Bluebirds the better option. The 23-year-old has spent recent seasons on loan to UK and French clubs, with a spell at Rangers keeping him busy in 2019/20.

The Daily Mail says Crystal Palace have contacted Fluminense to ask about the availability of forward Evanilson. The Brazilian club, who have the 20-year-old who has also been courted by Manchester City and Liverpool on loan from Tombense, would prefer he remain until the end of their season. Palace are also interested in 23-year-old Sassuolo winger – and former Chelsea player – Jeremi Boga, as a replacement for Wilfried Zaha.

Luis Suarez: Eurosport reports the Barcelona forward, 33, is scheduled to sit a language test on Monday as he attempts to attain Italian citizenship and join Juventus.