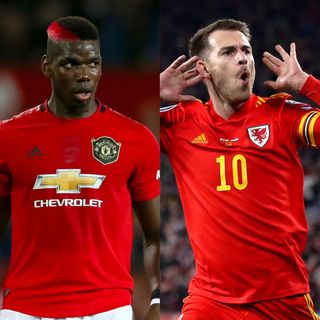 Manchester United’s want-away midfielder Paul Pogba could be returning to Juventus in a swap deal that could take Aaron Ramsey to Old Trafford, the Sun reports. Pogba has barely featured for United this season due to an ankle injury and has repeatedly been said to be keen to leave. He could return to his old club Juve, who could be happy to part with  £50million and Ramsey after the Welshman’s struggles to fit in this season following his move from Arsenal.

Crystal Palace are interested in Eintracht Frankfurt winger Filip Kostic, according to the Sun. Eagles manager Roy Hodgson has been monitoring the 27-year-old, who could become available in the summer. The  £10million-rated Serbian is being eyed as a replacement for Wilfried Zaha, who looks set to leave Palace this summer.

Wolves and Burnley have joined in the hunt for Leeds’ midfielder Kalvin Phillips, the Daily Star reports. The 24-year-old has already caught the eye of Sheffield United, who are considering a £20m swoop. Manchester United and Aston Villa are also said to be interested.

Liverpool are interested in young Brighton defender Ben White, Inside Futbol reports. The 22-year-old is currently out on loan at Leeds, where he has been a fixture in 37 appearances this season. Leeds will want to sign him permanently if they gain promotion to the Premier League, but could be outbid by Liverpool.

Manchester United’s Chris Smalling and Arsenal’s Henrikh Mkhitaryan could see their loan spells with Roma become permanent, according to Sky Sports. Defender Smalling, 30, and midfielder Mkhitaryan, 31, have been performing well for Roma this season, and manager Paul Fonseca says he would love to keep hold of the duo beyond this season.

Jack Tucker: Gillingham’s 20-year-old central defender is being watched by Aston Villa and Birmingham, according to the Birmingham Mail.

Daniel Akinleye: Aston Villa are keen on the 13-year-old, currently with French third-tier side Quevilly-Rouen Metropole, the Birmingham Mail reports.

Jude Bellingham: Liverpool have added their name to a host of clubs interested in the Birmingham 16-year-old, the Daily Star reports.