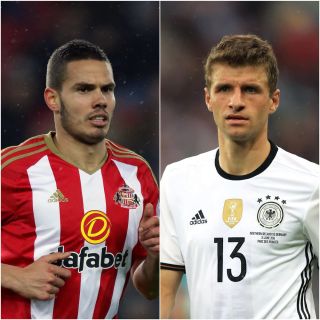 JackRodwell, who has had spells at Everton and Manchester City and was released by Blackburn after last season, could soon be plying his trade in Serie A, reports the Daily Mail. The 28-year-old midfielder, who has three England caps, could be an option for Roma after their squad was struck with injuries.

ThomasMuller is wanted by Manchester United, as the Red Devils mull over options to reinforce their attack, the Daily Star says. Romelu Lukaku and Alexis Sanchez left Old Trafford over the summer and will bid for the Bayern Munich man in January, the paper adds.

However, United have cooled their interest in moves for Leicester duo Ben Chilwell and midfielder JamesMaddison, the Manchester Evening News says.

Suggestions that JoseMourinho is being lined up for the Borussia Dortmund job have been played down by the German club, according to the Daily Mirror. The Portuguese’s name has also been talked about in connection with Real Madrid due to pressure on current boss Zinedine Zidane.

AC Milan are keen on bringing in DjibrilSidibe, who is currently on loan at Everton, reports the Liverpool Echo.

Denis Zakaria: Manchester United are looking to the Borussia Monchengladbach midfielder as a long-term replacement for Ander Herrera, who left Old Trafford in the summer, Bild reports.

Kerem Baykus: The Trabzonspor midfielder has attracted attention from Leicester, according to Fotospor.

Max Aarons: Tottenham manager Mauricio Pochettino could make a move for the Norwich right-back in January but may also be tempted by West Brom’s Nathan Ferguson, says the Daily Mail.