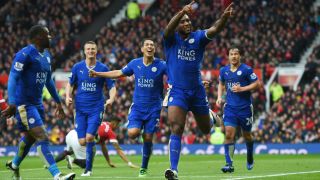 In what will go down as arguably the greatest achievement in sport, Leicester City have been crowned Premier League champions.

From 5000-1 outsiders after almost being relegated in 2014-15, Leicester remarkably sealed the title thanks to Chelsea's 2-2 draw at home to second-placed Tottenham on Monday.

And the plaudits followed late on Monday as past and present players, as well as clubs across the globe, joined in the celebrations with Claudio Ranieri's men.

Leicester City have won the Premier League. The biggest sporting shock of my lifetime, and it's only my team.May 2, 2016

Congrats to Leceister City FC. What an achievement....financial muscle, depth of squad, experience...all way behind the so called big boys!May 2, 2016

BREAKING. Leicester City are Champions of England !!The 24th club to win the English title.CONGRATULATIONS May 2, 2016

Congratulations to for winning the . What an unbelievable achievement by Ranieri & the players May 2, 2016

Congratulations to Claudio and on a magnificent achievement! May 2, 2016

We wish to congratulate and especially their headcoach Claudio Ranieri congratulations Claudio! May 2, 2016