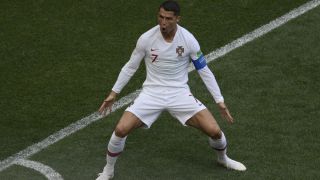 Since Friday it has been the most talked about chin in the world.

When Cristiano Ronaldo scored the opening goal against Portugal's Iberian rivals Spain, he wheeled away, executing his trademark 'siuuuu' celebration before frantically rubbing his chin with the ferocity of Aladdin hoping to entice the genie from the lamp.

Social media went into overdrive. Why did he do it? Did it have a hidden meaning? Was it a dig at Lionel Messi?

Barcelona's bearded captain Messi, of course, was the centrepiece of an advertising campaign before the World Cup which saw him posing with a goat. GOAT is an acronym for 'greatest of all time'.

He's also Ronaldo's arch-rival in the seemingly never-ending debate over who is the best player in the world.

Ronaldo took things up a notch in the intrigue stakes by sporting a goatee in Wednesday's clash with Morocco in Moscow.

The questions will start again and people will speculate and pontificate as though it matters and, of course, it does not. Not one iota.

2 - Cristiano Ronaldo has become the first Portugal player since José Torres in 1966 to score a goal with his right foot, left foot and head in a single World Cup tournament. Collection. June 20, 2018

The focus should not even be on their talent. That has also been discussed long and often.

What stands out most when you watch Ronaldo and Messi is their work-rate and their dedication to their craft even though, as one press box colleague sagely noted, they occupy opposite roles in their national teams.

With Argentina, Messi is asked to do everything. He is inspiration, creator and goalscorer. Even for one so magically gifted it is too much.

For Portugal, everything is done for Ronaldo. He simply adds the gloss, the finishing touches, the icing on the cake. Admittedly, this is a latter-day incarnation of Ronaldo; CR7 2.0. The previous version was the swashbuckling winger with the mesmerising feet who could tear teams apart singlehandedly.

Across both, he has now managed 85 goals for his country - his 85th coming in the fourth-minute at the Luzhniki Stadium, a brave header among the flying boots to give his team a fourth-minute lead.

It moved the Real Madrid man second on the all-time list of international goalscorers, ahead of Ferenc Puskas and behind Iran's Ali Daei.

It also proved enough to win a low-key encounter but even that was largely down to the 33-year-old's desire in his own box, frequently heading away Morocco set-pieces at the near post. Add in the link-up play and the frequent cajoling of team-mates and it all added up to another satisfying afternoon for Ronaldo.

Not that it was appreciated by everyone in Moscow, though. After lashing a wonderful chance high over the bar at the start of the second half, cries of "Messi, Messi" cascaded down from the stands.

Ronaldo could have the last laugh as he will likely lead his team into the round of 16 here in Russia while it remains uncertain that achievement will be matched by Messi following Argentina's opening-match draw with Iceland.

As for the GOAT, the argument and, in particular, the goatee, it's best to ignore.