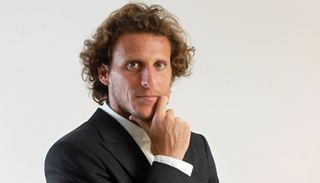 The former Manchester United, Villarreal and Atletico Madrid goal-getter endured a turbulent 12 months in Italy after joining the Nerazzurri in 2011, scoring just two goals in 18 Serie A games due to injury.

The 33-year-old Uruguay international swapped the Inter of Milan for the Inter of Porto Alegre by agreeing a three-year deal with the Brazilian outfit in July 2012.

Speaking in the first of his exclusive monthly columns in the June 2013 issue FourFourTwo magazine, Forlan says he no longer felt welcome at San Siro.

"I knew I was leaving Inter Milan. I wanted to say goodbye to my team-mates, but people wouldn't take my calls," he says.

"I tried to reach Ivan Cordoba, but a club official told me some bullsh*t about tomorrow being a difficult day for me to go in and say goodbye.

"The message was clear. I wasn't welcome anymore."

Having struggled to shine in England with 17 goals in 63 league games for United, Forlan took centre stage in Spain by scoring a staggering 128 goals in 240 league outings.

He picked up the 'Pichichi' trophy on two occasions in 2005 and 2009 for topping the La Liga scoring charts with Villarreal and Atletico, and bagged both goals against Fulham - as well as the man of the match award - to seal Europa League glory for Atletico in 2010.

"Football is still my life. I hope to tell you about my career now and in the past, and look at topical events. And I can look back at a sport which has been good to me, playing alongside [Luis] Suarez, [Sergio] Aguero, [Ruud] Van Nistelrooy, [Juan] Riquelme and Leandro Damiao under coaches like [Sir Alex] Ferguson, [Manuel] Pellegrini, Oscar Tabarez and my current boss, Dunga."

Read the first of many Diego Forlan columns in the June 2013 issue of FourFourTwo digitally and in print. The issue revisits 'The Galacticos' - Zinedine Zidane, Luis Figo, Ronaldo and Roberto Carlos - 10 years after chatting to them in our March 2003 edition, and asks them again about the majesty and madness of Madrid. The magazine also follows PSG midfielder Lucas Moura around Paris and glances back to Lazio's 1974 Scudetto-winning team, the Italian Crazy Gang.