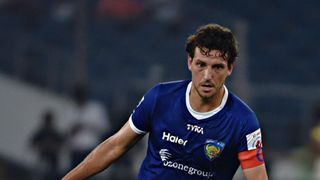 Elano was part of a Chennaiyin side that defeated Goa 3-2 in Sunday's ISL final in Fatorda.

However, the victory was marred when Elano was arrested and taken to a police station for questioning following claims by Salgaocar that he was assaulted by the former Brazil international in an altercation after the final whistle.

The midfielder was questioned for two hours before he was eventually released after a judge set bail.

"The Respondent shall release the Applicant, herewith, if offences alleged are bailable upon turning bail bond to the satisfaction of the investigation officer," the official ruling from the judge read.

Chennaiyin appointed lawyer Rajeev Gomes revealed Elano's release was delayed by the police's demands for the Brazilian's passport even though handing it over is not a requirement for bailable offences.

"There is no condition that he has to give his passport and so we haven't given his passport to the police. There was an unnecessary delay from them. In bailable offences, it is the duty of the police to release but because of some pressure they weren't releasing.

"This incident has brought a bad name and reputation for the image of Goa. This incident shouldn't have happened and this is not the way frustration should be vented.

"This is an act of frustration. Defeat should be taken in a sporting spirit and this is not the way. I am also a FC Goa fan but this is not the way. You cannot make flimsy complaints and detain people. He is not a criminal to be detained this way. You can understand the pressure put on the police to detain him. This is a bogus case. The surety is up to the investigating officer.

"He is free to leave the country and the condition is that he must appear before the court as and when the case comes up. He can come back to the country whenever he wants and that is why a surety is required."

As well as City, the 34-year-old has represented the likes of Shakhtar Donetsk, Galatasaray and Santos.

Elano also made 50 appearances for his country, and won the 2007 Copa America and 2009 Confederations Cup.