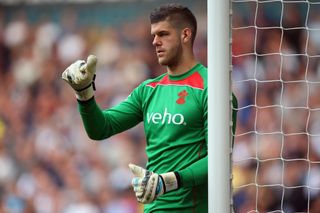 The goalkeeper was one of eight new signings at the club during the close season, as new boss Ronald Koeman built a new-look squad following the departures of Luke Shaw, Calum Chambers, Rickie Lambert, Adam Lallana and Dejan Lovren.

Southampton were expected to struggle after losing so many key players as well as manager Mauricio Pochettino, but they sit second in the Premier League table after 11 matches - four points behind leaders Chelsea.

Forster believes the spirit within the club is behind their impressive start to the campaign.

"There is something very special about the club," said the England international. "There is togetherness here I've never experienced before, especially when you consider the turnover of players.

"The manager and coaching staff make us believe in ourselves and give us the courage to go out and play."

Aston Villa are next up for Southampton, but Forster's immediate concerns turn to England's games against Slovenia and Scotland.