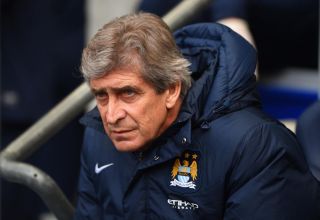 City and Chelsea are considered favourites to finish top of the table this season, with Jose Mourinho's men currently six points clear of the 2011-12 champions having played three games more.

However, in-form Liverpool are also firmly in contention - four points behind Chelsea with a game in hand - and Pellegrini has refused to rule out Arsenal despite Arsene Wenger's side suffering a 6-0 defeat at Stamford Bridge on Saturday.

"I don’t think that it is just between Chelsea and Manchester City," said Pellegrini after City recorded a 5-0 home victory over Fulham.

"We must continue concentrating on what Liverpool are doing every week because they are playing well and scoring goals.

"Arsenal made a bad game but they are still seven points behind Chelsea, but with one game less.

"So I think the four teams have exactly the same chances to win the title.

"That's a lot of points at the moment to decide that the title will be just for the two teams."

Pellegrini only had one fully-fit striker - Alvaro Negredo - for the win over Fulham after Edin Dzeko missed the game due to illness, although Stevan Jovetic was on the bench after a recent hamstring injury.

City's boss is hopeful of having Dzeko available again for the Manchester derby on Tuesday.

"I hope (to have him back) but at the moment I don't know," he added. "He felt sick. I think it's not serious but we'll see tomorrow (Sunday) morning."