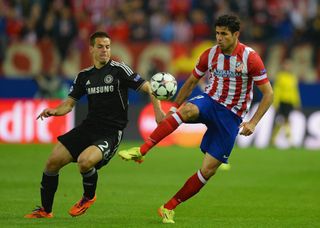 That came just five days after the Portuguese had seen his side produce a back-to-the-walls performance in the 0-0 Champions League semi-final first leg at Vicente Calderon.

Now, Mourinho will face scrutiny once more as he prepares for Wednesday's second leg at Stamford Bridge, against an Atletico side who are the only unbeaten side remaining in this season's Champions League.

Mourinho's team selection is will also come under the microscope. Ahead of the Liverpool showdown, he had threatened to name a weakened side.

An expectant Stamford Bridge crowd will demand a more expansive approach on home soil, yet the expected absence of Eden Hazard and Samuel Eto'o would hinder that gameplan.

Captain John Terry is also doubtful after injuring his ankle in the first leg.

Furthermore, Atletico are continuing to compound the odds in domestic and European football this season.

A 1-0 triumph at Valencia on Sunday made it nine straight league wins for Diego Simeone's men, who inch ever-closer to claiming the Liga title.

Intriguingly, the match pits the last two winners of the UEFA Europa League against each other, and both teams will be going all out to succeed on Europe's biggest stage.

Key to Chelsea's hopes could be the European pedigree of Mourinho. The Portuguese is looking to become the first man to reach the Champions League final with three different clubs.

However, Simeone's charges know an away goal could prove crucial after the first-leg stalemate, a result that means Chelsea will likely need to inflict a first Champions League defeat of the campaign on Atletico if they want to repeat their 2012 Champions League success, although another goalless game could lead to Chelsea progressing via a penalty shootout.

Atletico's only final appearance came in 1974 but midfielder Raul Garcia, who scored the winner against Valencia on Sunday, stated his side have no intention of holding back, telling Canal+: "We have to go all out (against Chelsea)."

Simeone is unable to call on the services of captain Gabi, who misses the game through suspension.